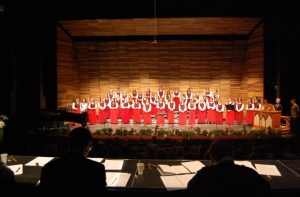 Through the commencement in 1988 of Budapest International Choir Competition, Gábor Hollerung called a chorus competition into being with a new arts concept. This has since become a sample for most of the world’s choir competitions. He was the initiator and an art concept designer of Choir Olympics and World Choir Games, held biannually since 2000 (2000 Linz, 2002 Busan, 2004 Bremen, 2006 Xiamen, 2008 Graz, 2010 Xiaoxing, 2012 Cincinnati, 2014 Riga).
In 1995 he participated in the organization of European Musical School Festival housing 500 ensembles from all over the world.
Gábor Hollerung has been a co-organizer of Kodály Zoltán Hungarian Choir Competition since 1997. He organized the French-Hungarian gala in 2000, at a request by the Office for the French-Hungarian Cultural Year.
He has been the Arts Director of Zemplén Festival, one of the most prominent events with a full range of traditions, since 2004, at the assignment of Antenna Hungaria Zrt.
Gábor Hollerung withdrew from Interkultur International Musical Competitions Foundation in 2013 and was one of the founders of the Graz-seated Inchoral International Choral Festival Network in 2014. Additionally, he is the art director of a great number of other international choir competitions.