Budapest Academic Choral Society (BAK) was founded in 1957. It functioned as the University Choir of KISZ Central Arts Ensemble until 1989. BAK became an emblematic ensemble of the capital in the past over half a century, taking pride in winning several Hungarian and international choir competitions and acting as a regular performer in national and international musical life. 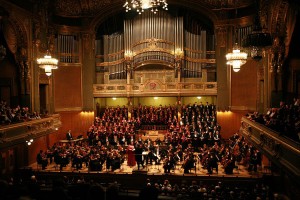 Gábor Hollerung was the second conductor of the choir between 1978-80 and has been its master conductor and Art Director since 1980. He can glory in an extraordinary series of success: he and his choir have taken the first place in each prominent choir competition in Europe, and several grand prizes (inc. the grand prize in Bartók Béla International Choir Competition, Debrecen; the Llangollen title of “Choir of the World”) are also attached to his name. The jury awarded the best conductor’s prize to him in Debrecen in 1984.
Ranking among the 30 best choirs in the world, his choir was invited to Sydney World Symposium on Choral Music and Taipei International Choral Festival. BAK used to be a regular participant in Liturgica Festival, Jerusalem; and has performed with several Hungarian and foreign orchestras.

Budapest Academic Choral Society regularly participates in the concerts of Dohnányi Orchestra, Budafok. The two ensembles used to organize a joint series of concerts for years.